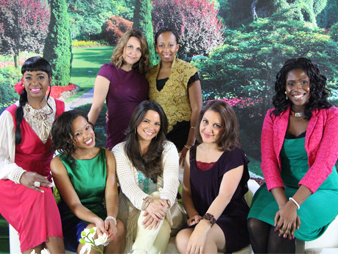 The event, attended by around 200 women focused on empowering women and encouraging them to value and not be negative about themselves.

Chrissy was one of the speakers at the event and shared her past experiences with depression, low self-esteem and lack of self-belief. “I could never have imagined that one day, I would be a TV presenter or that I would be able to stand in front of a crowd to speak.   If I changed and found confidence, so can you,” she said passionately.

The afternoon also included a talent show for members of the audience with prizes and make-up tips.

Gemma Leon one of the other speakers added: “We were very pleased with the event. There was a balanced mix of entertainment, advice, self help and reflection. The audience reaction was very positive and I believe they benefited from the entire event.”

Every woman in the audience received a white balloon and was invited to write on it something about herself that she wished to leave behind – namely her uncertainties, insecurities and so on.  As they burst the balloons, the audience vowed to focus on their best attributes and use them to build better lives for themselves.

Last year, the Love School event was phenomenal. This year, it hit the ball right …