I grew up in a loving home with great caring parents who told me they loved me every day and took really good care of me and my sister.

I was very quiet as a child and liked my own company. My sister, on the other hand, was funny and outgoing and I often wished I could be like her. I wasn’t jealous of her, she was someone I really looked up to, but I just wanted to be like her.

Growing up, I was very shy and insecure and at around aged 16, I developed a phobia of death which brought on panic attacks and depression.

A lot of people develop issues because of some sort of trauma they go through. But I had it all, a great family, a nice house, financial stability, a good education – there was no apparent reason for me to have these kinds of problems but depression isn’t fussy – anyone will do.

I will never forget the day I had my first panic attack. Only someone that’s been through it knows how awful it is – worse than a horror film. I was left shaking uncontrollably and screaming for dear life. I developed so many complexes and at one point gained a lot of weight and hated the way I looked.

My poor parents tried to help me as best they could. They took me to my GP who said I was too young to take anti-depressants so I was referred for counselling instead. But I didn’t get much out of it at the time as I felt my counsellor didn’t understand me and couldn’t offer me the solution I so desperately needed. So I lied and said I was better so I wouldn’t have to go anymore.

My journey to find happiness began. I tried all sorts of things – clubbing to have ‘fun’, religion, candles, incense, spiritists and when all that didn’t work, I threw myself into weight training and spent a lot of time pushing weights and doing aerobics classes, sometimes one after the other. I became super fit, the weight dropped off, I had no shortage of guys asking me out but inside, I was the same depressed, insecure, person.

One of my worst moments was when I had a terrible panic attack and burst into the living room where my parents were watching television. I ran straight into my father’s arms, shaking and sobbing uncontrollably. My dad held me and sighed and said, “I don’t know what to do anymore. I don’t know how to help you.” His voice was so sad, so desperate. In my mind I was thinking, ‘If my own dad who had always been there with the best advice who always knew what to do, who had always protected me didn’t know what do to, I was doomed.’ I knew I was causing my family so much pain and though I loved them so much, I withdrew emotionally, I became distant. Though they were desperately trying to help me, I didn’t want to cause them anymore pain. 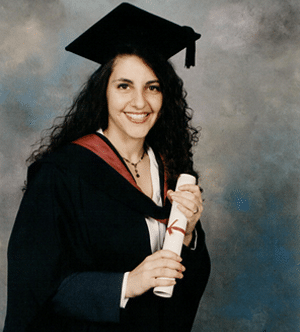 I went through college and university and I didn’t tell anyone about my issues apart from a close friend. I used to look at other people and actually be jealous that they would be smiling and laughing – yet my smiles were fake. Inside I was a mess.

When my friend told me her brother who was twice my age was in love with me and wanted to marry me and would treat me like a princess, I was actually quite tempted. I wasn’t attracted to him but I thought that perhaps if I got married and had kids, it would ease the depression as my focus would be elsewhere – on a husband and children. That’s how desperate I was to feel better. Thankfully, my sister made me see sense and I turned him down.

When I met my husband 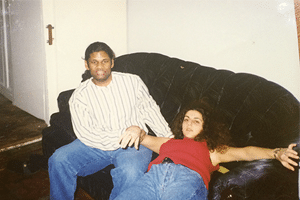 I met Michael at University. We were friends for a couple of years before I started developing feelings for him. I nervously told him how I felt about him, and after a shocked expression and a silence that seemed to go on forever, he said he had never thought about me in that way, and that was that. But two weeks later, he called me to say he’d been thinking about me and we started a relationship.

I wish I could say it was great. There were some good times, but most of it was a combination of obsessive behavior, arguments and eventually physical fights instigated by yours truly. Because I felt a little better when I was with him, I clung to him for dear life and was extremely needy. It was like I depended on him for a little bit of happiness, where I had tiny glimmers of feeling normal. I didn’t realise however how destructive I was becoming to our relationship. I was very jealous and wanted his full attention. It’s like. I didn’t value myself whatsoever and would go to any lengths to get his affection.

But despite all the arguments and fights, we still loved each other and I moved in with him and his family. Things got even worse and we would sometimes be up until the early hours arguing and getting physical with no regard for his mum, brother or neighbours who could hear us. After having a fight, we would sometimes cry in each other’s arms as we couldn’t understand why we were hurting each other so much.

So that was me. Seven years of hell with depression and panic attacks and all sorts of deeply-rooted issues and now with a destructive relationship. Why couldn’t I just be normal?

How I got help

But then I came across the UCKG HelpCentre and it was truly a lifeline for me. I was never a religious person and certainly not interested in going to a church but this place was different.

I’d seen a sign outside that read, ‘Does it pay to pray?’ Well, I’d tried everything so why not try this? What did I have to lose? I walked in to the Centre in Brixton for the first time still shaking from a panic attack the night before, and I was welcomed and made to feel at home immediately. The person I spoke to seemed to understand me completely and the best part of it was that he believed my life could be different, that I could be happy one day and was told that there I would learn all the tools to get there. That meant so much to me because I had almost stopped believing in myself. 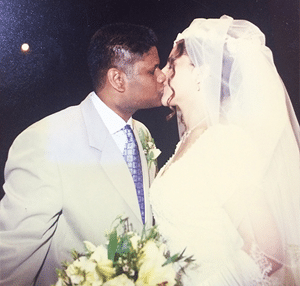 Combining the practical and motivational advice with the spiritual help was a winning formula for me and week by week, I started getting better. Unbelievably, from that first visit, I had no more panic attacks ever again. Within a few months, the depression had completely lifted and that had an impact on my relationship. Michael and I started to get along better. Instead of shouting, swearing and screaming at each other and lashing out physically, we learnt to listen and to communicate in a positive way. We now have a beautiful relationship. He’s my best friend and we love each other’s company. We got married and I couldn’t have asked for a better husband, although I have to say, I also think I turned out to be a pretty good wife. ☺

I honestly don’t know where I would be today if it wasn’t for the kindness, patience and perseverance of the people at the HelpCentre. They certainly know how to get the best out of people.

And what’s life been like for me since? Well, I learned to value myself and my confidence and self-esteem grew. I got into TV which is something that I had never seen myself doing before. I used to hate speaking in front of people and presentations at college and Uni were a real issue for me so you can see the turnaround. I was soon offered my own show which is called The Chrissy B Show. My show is all about reaching out to people with mental health issues and inspiring viewers to be happy and go for their dreams.

I’m so grateful that someone saw the potential in me and believed in me when I didn’t even believe in myself. I never ever imagined I could ever be this happy or successful and I’ve made it my life’s mission to pass that on to others through my TV show and to everyone I come into contact with.